I have discovered since I implemented the CWK9’s (Clone Working K9s) program that the clone’s intended personality is definitely present, however, their environment is key to the development of the desired traits.  Apache Actual was raised here at CTAC (Canine Tactical) pack style and at the time I was still in the early stages of developing my canines in their puppy stages.  My training style has evolved gradually from a traditionally simple concept to a more complex style.  I would say the only difference between Apache Actual and Apache 1, is the fact that Apache 1 was raised/partnered with Eudoris®4 in their off time and was not introduced to a kennel until mid-October, which I will go into detail later in the newsletter.  At this time the different living arrangements appears to be a small change, but I’ve learned it played a role in terms of desired trait development.   Granted, I do feel the core personality/temperament is genetic, however the core traits need to be developed/shaped during adolescence.

The previous newsletter: http://blog.caninetactical.com/?p=1063 we pushed Apache™1 to the core: We introduced Narcotics imprint (boxes), basic bite work, and introduced to muzzle and building searches (seams).  At 15 weeks Apache™1 training focus was in developing the hunt and fight, and in defining behavioral traits.  Since the Morton/Method thrives on the hunt, this month we stopped all bite work to hammer home the hunt while Apache™1 is teething.  The goal was to train him on basic hides with positive results and introduce him to article and be neutral to gunfire, which is important in a working canine. Introduction in all areas as a puppy is key to success, as well as, discovering deficiencies in the early stages. One of the things that keeps me motivated in the Clone Working K9 program are the proven concepts such as in the Apache™ Brand.  Apache Actual was raised and trained here at CTAC.  Why is that important? Apache™1 is performing better than Apache Actual to date. Below is a video of Apache Actual and Apache™1 detection and gunfire training. Note the resemblance.

• PRODUCT UPDATE: WE NOW HAVE EMBROIDERY, CUSTOMIZE  YOUR GEAR WITH CANINE TACTICAL AND WE HAVE GARMIN SPORT PRO CARRIER FOR MOLY GEAR OR DUTY BELT 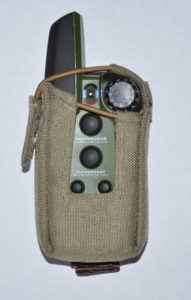 • EUDORIS®2 IS SMOKING IT THIS YEAR ON GAME TRACKING. 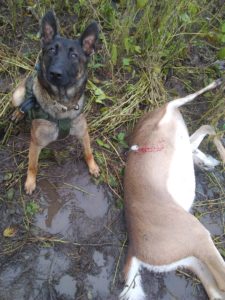