Newsletter – Way of the Decoy

a person who entices or lures another person or thing, as into danger, a trap, or the like.

It seems everyone involved becomes a trainer as soon as a canine evolution begins. Whatever your background or past experiences, if you are not on the business end, i.e. a decoy, you need to step back and let the decoy do their job. If the canine is learning and is trying to work source or engaging, either in suit or muzzle, the last thing the canine needs is direction from the peanut gallery.

“A  Decoy must be knowledgable in understanding drives and how to bring out certain drives during aggression/patrol training. Not just in the bite suit, but a muzzle as well.”

A Decoy must not be short tempered. The problem with short tempered decoys and handlers is it creates conflict. Conflict creates handler-aggressive canines; it creates inconsistency and limits the canine’s potential.

A Decoy must understand the concept of timing – the choice, judgment, or control of when something should be done.

A Decoy must be flexible – able to easily modify direction and respond to altered circumstances or conditions.

A Decoy must be patient – able to accept or tolerate delays or problems without becoming annoyed.

A Decoy must be mobile – able to move freely, easily, especially in the muzzle application. A decoy should be quick and in a split second be able to turn passive, take the fight to the ground and bring it back to their feet in seconds.

At Canine Tactical, we train via body language not commands. Commands can be overrated.  Experience has shown me that canines respond better and learn more through body position and movement. This applies also to the decoy during aggression/patrol work. If a decoy doesn’t successfully incorporate the traits above, then the canine isn’t getting the quality of work needed for any evolution.

Knowledge of canine drives – It’s important for decoys to understand drives in canines because if you allow the canine to engage in a certain drive only, this could possibly result in confusion for the dog when engaging in a real world bite. An example is the bite sleeve. I feel bite sleeves are for complacent/unknowledgeable decoys. You can create target fixation and play/equipment fixation with a bite sleeve. Handlers tell me they are developing the bite using the sleeve. Negative… The type of bite is hereditary. By working the bite aspect in a suit you will learn it is more effective (end state) than the sleeve.

Temperament – As stated above, short tempered decoys create conflict in a canine. A decoy who gets upset because the canine isn’t grasping the concept of the evolution or isn’t responding well to the particular style of training, then the decoy should look in a mirror for the real issues.  At no time should decoys or handlers bring personal issues to training.

Flexible – I can never predict how a training evolution is going to go. I tell decoys, just assume it won’t go the way you want it, that way you won’t get caught with your pants down. I heard a story about a well known decoy taking a hit by a canine that wasn’t trained to target any specific appendage. It was a running bite and the decoy turned and presented appendage and the canine bit the upper back area just below the neck. Since the decoy was more insulted because canine didn’t bite what he gave him (human value), his panties were in a bunch. This individual in turn wanted the canine to immediately come off the bite and then failed the canine.

“Nothing in the realm of battle goes as planned”

What makes a good decoy is simply understanding the concept that during decoy work, things will not always go according to the plan, but that is not cause to create bad timing decisions, become impatient, and turn the evolution into a waste of time.

Patient –  Being patient plays a big part on the emotional side of things. The more patient a decoy is, the more time it takes to reach that short tempered phase. The more patient the decoy, the less conflict on the canine.

Mobile – a decoy is all about reaction. Sometimes a reaction is stepping backwards and sometimes depending on suit/muzzle, a reaction is falling to the ground on your back and then getting back up within seconds. Some canines may need someone more mobile than a canine that is fully trained and doesn’t need so much reaction from the decoy. Typically this is where trainers want to be.

Although, a skilled and intuitive decoy is essential to the working canines’s development, sometimes it is important towards the end of courses or during a scenario to work an untrained decoy with a canine in a muzzle.  By doing this you get a true reality check of how a canine will react with someone who doesn’t know what to do. It creates a real life scenario.  It gives you authentic feedback on the canine.

Tip of the Month – No matter what your training technique is: food reward, choke chain, electric collar device, prong collar or flat collar…DON’T CREATE CONFLICT. Conflict is usually created during a transition of training, when a trainer is cutting corners and when the “alpha male” style of training is applied incorrectly. 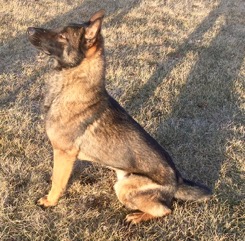 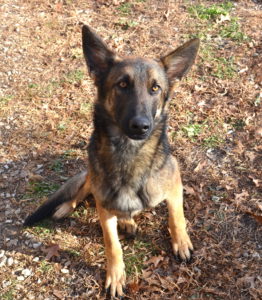