I don’t know of a canine handler who doesn’t want their canine to work independently from them  regardless of the task.

Without the benefit of having a canine trainer within your agency or in your area to assist with sustainment training, canine handlers and trainers tend to get too involved in trying to ‘help’ their canine partner during training. It also leads canines to become dependent on, or to literally look at, their handler for step-by-step instruction to get through any task.

“Canines that depend on their handlers will, in time, diminish their effectiveness”

When a canine is released to do a job, if properly trained, the canine will do their job independent of their handler. Handlers do need to supervise/oversee and support their canine, but not to the point of micromanaging them while they work.

A handler who tends to help at the wrong time: When a canine indicates a subject behind a boarder, i.e. door, while suspect/decoy isn’t visible, the canine will whine/stare because it doesn’t fully understand what it is suppose to do, is waiting for handler to open the door or isn’t confident enough to be independent because handler assists in every stage of training. So instead of proper decoy training taking place at this time, I have witnessed handlers that will walk up to the canine and begin issuing command(s) and believe they are helping, (refer to tip of month below).  By consistently doing this, the canine will then pair these situations with the handler, as opposed to focusing on the tasks.

Overpraising: I believe handlers who consistently overpraise their canine for tasks that are already trained, verbally, are not confident in their canine or are nervous and lack confidence in themselves as a handler.  They think consistent verbal praising encourages or helps their canine. In reality, overpraising is pairing all the situations with the handler.

The end state of a trained canine is training without prompting the canine; a canine that is independent from handler while maintaining the task at hand. It takes the right canines with the right drives and proper training.

Tip of the Month (Morton Method): Teach your canine to bark on command in a static environment first, then the decoy (and not the handler) can apply it during suspect indication behind a barrier. Doing so, will keep canine focused on threat. (refer to videos below – beginning and end state) 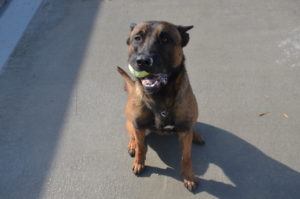