The secret to developing a well rounded Working Dog is Obedience.

Obedient Definition:  Doing, or being willing to do, what you have been told to do by someone in authority

Some of these commands are initiated by rituals, and voice commands are oftentimes not needed.  However, when all is said and done, they are commands.

My answer is this: handlers and trainers create conflict by not segmenting obedience training. 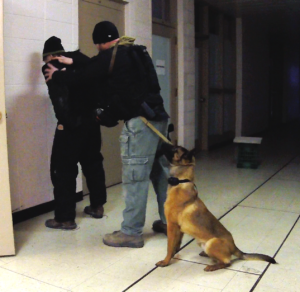 By not segmenting obedience training, handlers and canine protection owners create conflict by thinking that the only way to get their canine to release or come (return to handler when called) is with an electric collar device at high or extreme levels, (which creates conflict).  And the only time handlers seem to utilize electric is during bite release and recall off a bite (which creates conflict), as opposed to properly using the electric device in all areas of obedience (refer to newsletter next month).

Another reason handlers have issues with bite release and recall is because trainers and handlers don’t seem  to realize that a canine with high equipment drive performs at higher and more extreme levels, which causes undue stress and behavioral issues. In other words, the more you obedience train with bite suits and sleeves, hidden sleeves or any kind of sleeve for that matter (referring to adult dogs who have problems with bite release and recall – I do set the foundation for young dogs with puppy sleeves), the more you train with equipment only, the more you build equipment dependence in your canine. 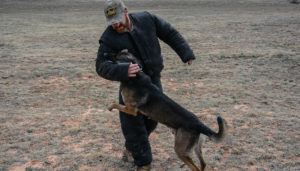 As for the bite release, I start training European dogs I buy from vendors by bringing it back to the ball.

So the “let go” command – I start it with tennis ball during detection, I teach detection first before bite work because why not start by teaching the dogs to use their noses from the beginning. When that phase is done, I set the foundation of the “let go” command without the conflict of having equipment. I hear this across the board, “I don’t want to take the ball drive out of my canine.” Building drive for the ball? Sometimes handlers don’t seem to understand that the ball is just a reward.  Your canine is hunting because of their hunt drive.

So, start your bite release with the ball (it eliminates equipment, which helps your canine to understand what you want). Then slowly incorporate your suit at a distance and slowly work towards handler and leave the suit laying on the ground.

If you are working on recall, don’t give your dog a reward with a bite. You are creating conflict. Turn the tables. Put yourself in your canine’s position. That being said, reward your canine with something else like a ball. Don’t give the sight picture of dog biting the suit in that situation. Throw the ball and do a recall. Doing that eliminates conflict with equipment/suit.

It is important to break down training. If you are working recall stick with recall, working nothing else. No building searches, no bite work, no detection, no article search, no tracking.

Handlers tend to downplay obedience, they allow their dog to pull on the leash, allow their dog to continue with bad behavior issues and ‘run the canine program’, then fail to fully understand why they can’t get their dog to ‘let go’ or recall. It is critical for team proficiency, safety, and overall success as a canine team that obedience begins on day one and is consistently incorporated in training sessions. 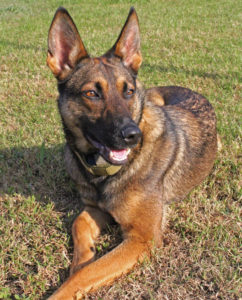 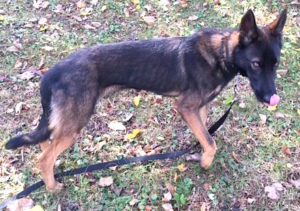